Building a history of reinforcement from almost nothing

We all have to start somewhere. A new parrot will have had no time yet to build a nice long history of reinforcing outcomes with us. Maybe that parrot is used to humans and being handled in which case new reinforcing consequences are quickly learned. But maybe our parrot is fearful of humans. Where do we start?

Another example of a primary (unlearned) reinforcer is escape from an aversive. Negative reinforcement is also known as escape/avoidance learning. The behaviour is strengthened (reinforced) by escaping an aversive (something the parrot doesn’t like). For example, pushing a hand into the bird’s chest to make it step up. The bird steps up to escape the sensation of being pushed in the chest. The bird has no choice but to step up… or may well learn to bite to make the hand go away. Not the best way of teaching a step up since you are also pairing yourself with an aversive, but we can use negative reinforcement in a more positive way when approaching an “untamed” bird.

Ollie came to me “untamed,” “cagebound” and afraid of humans, especially hands. I had to find a way to get close enough to be able to pair myself with good experiences, like favourite treats. My presence was an aversive. He was frightened of me. I used negative reinforcement to approach him.

Starting from the far side of the room, I would walk towards his cage very slowly. When Ollie showed slightly uneasy body language that was my starting point. I took a couple of steps back and waited for him to show relaxed body language (RBL) again. When I saw RBL I took a slow step forward (introducing an aversive). His continued RBL then earned half a step back (removing the aversive). I’d wait a few seconds and then take another slow step forward. His RBL earned half a step back, and so on until I could get closer and closer to his cage with him remaining calm. If his body language changed at all, even slightly, then I would go back a couple of steps until I saw his RBL and then break the steps down even smaller. It took a week or two before I could reach his cage in this way, just doing a few seconds of training now and again through the day and always ending the training session on a successful step for him.

Other ways of approaching a nervous bird

Instead of towering over the bird, try getting down low when servicing the cage. I used to crouch down to change Ollie’s cage papers, clean the bars and perches, and even when slotting in the food and water bowls. I found Ollie more likely to show relaxed body language when I got down low, avoided direct eye contact, and moved in a slow and predictable way. Being predictable is an important part of building trust. This is why children, with their fast and unpredictable movements can be scary to our new arrival, unless taught otherwise.

When I could get close enough I would offer Ollie a palm nut. It didn’t take long before he was eagerly taking them from me.

Then I noticed he was choosing cashews out of his dry bowl first, so sometimes I offered a whole cashew (whole so my fingers could be as far away from him as possible). When he was successfully taking a whole cashew, I would then try giving him half, and gradually broke them into smaller pieces. So now we had two potential reinforcers – the palm nut and pieces of cashew – that I could use to condition desirable behaviour, like targeting or stepping up.

Plus, handing him treats like this began to pair me and my fingers with the delivery of something desirable, therefore my presence and fingers also became something to look forward to.

What potential food reinforcers can you use for your fearful bird?

Without obviously staring, notice what he/she picks out of the food bowl first. It might be apple, peas, walnuts, sunflower seeds, or millet spray. Something large like apple is useful as you can wedge a slice through the bars of the cage without going anywhere near the bird. Gradually over time, you can get slower and slower at wedging it, in the hope that eventually the bird becomes impatient to eat it with you still holding on to your end. Then after he’s used to this, you could try offering smaller pieces through the cage bars, then through the open door.  This would work with millet spray too.

Even if you have to start off with something smaller, you could try offering the morsel through the cage bars, if that is not successful, you can just drop the item(s) into a dedicated treat bowl and walk away. Gradually the bird will become faster at checking it out. When that happens, you can get gradually slower at dropping in the treats. The bird might eventually take the treat from your fingers before you let it go into the bowl.

Go slowly when working with a frightened bird because every time you go too fast, you lose the trust you have been so painstakingly building. You have all the time in the world. If you can manage to achieve the bird’s relaxed body language then you will be paired with that relaxed feeling.

Watch out for other potential reinforcers you can use!

I noticed Ollie would swing a bell and stick his head underneath so it would catch his head feathers – a self-head scritch! The bell catching his head feathers was eliciting a “feel good” emotional response. By this time he was used to my hands in his cage, so I carefully unhooked the bell and gently swung it above his head and he put his head down so it caught his feathers. Gradually I made the chain shorter until I was scritching his head holding the bell itself. It was still reinforcing his bowed head and eliciting the “feel good” response. I began handing him various favourite foot toys and because he was used to me skritching his head with the bell, he began putting his head down so I could skritch him with a foot toy.

My fingers got closer and closer until one day I gave him a short head skritch with my fingers. I gave him a piece of cashew as extra reinforcement. The process took 6 months.

Ollie would bow his head for head scratches very often. Just for fun I used them to start balancing various objects on the nape of his neck and then head.

The number of potential reinforcers for Ollie built up over the years as they became paired with other reinforcers. It became reinforcing to come out of his cage, chew boxes, sit with Kobe the Blue-headed Pionus (Kobe didn’t find this particularly reinforcing to begin with!), to fly, explore the floor, go out into the aviary, sit in the sun, and the list continued to expand.

I used pieces of cashew to reinforce targeting, the step up, and turning circles (all these were learned by shaping) and I have on occasion used head scritches to reinforce Ollie’s relaxed body language as I trimmed his toenails.

A newly slotted in food bowl reinforced Ollie’s flying back to his cage to eat. What a simple way to have a parrot go willingly back into his cage without even having to touch him!

Check out these great resources: 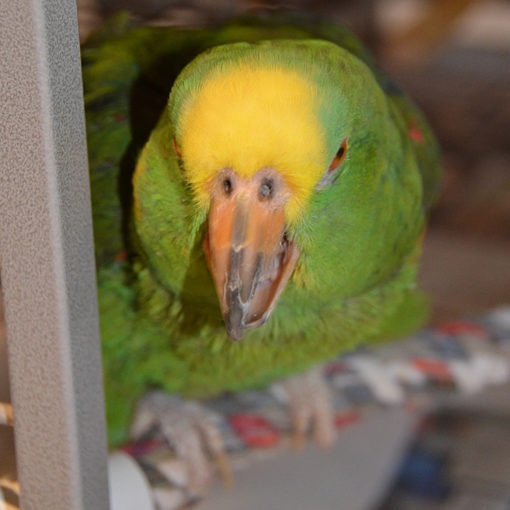 Biting is communication. Usually it means “No!” or “I’m not comfortable”, but can also be a response to over excitement or even […] 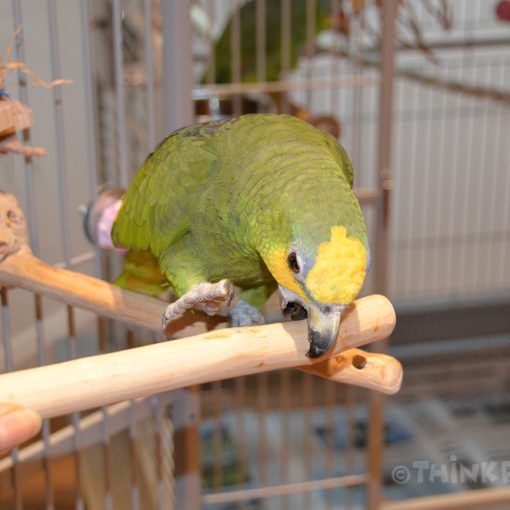 Shaping is a wonderful tool to teach your parrot any single behaviour without force. Shaping is breaking down the goal behaviour (in […]

If a consequence/outcome to a behaviour (the step up) is reinforcing, the parrot will most likely repeat the behaviour in the future. […] 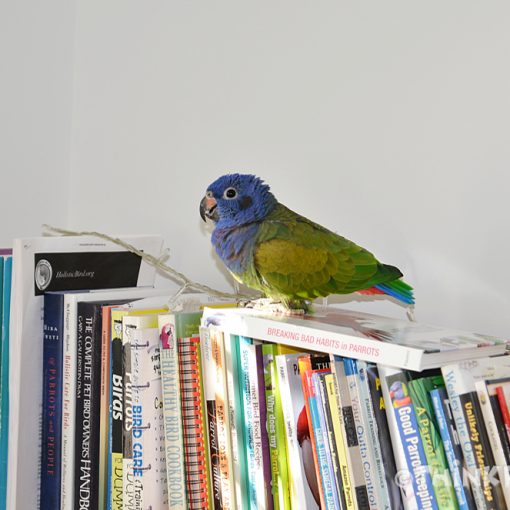 If the outcome to a behaviour is desirable, then we will repeat that behaviour. That outcome or consequence is therefore said to […]