Moving from London to Jersey, Channel Islands with four feathered friends was surely going to be a memorable experience. The trip would need some serious planning starting with the birds. I had twelve months to teach them travel cages can be fun!

Ollie the Orange-winged Amazon was going to be the biggest challenge. He had been with us for nearly four years and we were still working on taming and training. He also has Aspergillosis and the last thing I wanted was for the trip to stress him. At that point Ollie wouldn’t walk on flat surfaces, but he was able to step up on a hand held perch, so that would be our starting point.

However, first I had to desensitize him to the presence of the carrier by bringing it increasingly closer to his big cage. I was careful not to elicit more than the mildest of reactions. It took a week or two. When it was eventually positioned next to his big cage Ollie climbed down onto the carrier roof and door to check it out. Success!

Travelling by sea would probably be the least stressful for the birds. I decided on May, when the rough seas of early spring were calmer and temperatures still cool, and made some provisional enquiries. It all seemed pretty straightforward. The birds didn’t need passports as Jersey is part of the UK. I was asked if any of the species were CITES listed and if so I would need the relevant documents. We’d be given a pet sticker for the car and could check on them on the brief stopover in Guernsey. I hated the idea of leaving them in the car but there was no way around it. We’d take the fast ferry from Poole which, although longer by road, was shorter by sea.

Kobe the Blue-headed Pionus’ travel cage doubles up as a night cage so I knew there would be no problem with him. He is always hugely appreciative of the piece of almond he receives for going in and lets me know with bright button eyes, big puffy head, tail spread wide so it looks like a skirt, and the words, “Is zat yummy? Yum YUM!”

Chico the Panama Amazon and Bobbie the Red-lored Amazon had been with us for a relatively short time. I was still working on my relationship with Chico who arrived extremely aggressive towards women. Chico is over 50 years old, wracked with arthritis and is only partially sighted, but that didn’t stop him from climbing the cage bars with the speed of a fully abled youngster trying desperately to bite me. By the time of the move, I had taught Chico to station for a head scratch, but hadn’t had time to teach him to step up.

The easiest way to move him was to get him to station on one of his cage door perches. Thread the end of the perch through the mouth of a cut off plastic water bottle so that I could safely grip it without him mauling my hand. Unscrew the perch from the door and carry him and the perch to the travel cage. Since Chico is likely to fall, the carrier bottom was padded with a sheet of upholstery foam covered with a towel and papers.

Bobbie had arrived a little shy and was said not to be very tame. However, soon she was able to step up on my arm and as her confidence grew I began carrying her around and showed her the travel cage. She wasn’t sure about it at first, which was fine, we stopped at a distance she was comfortable with and walked away again. After a few days of getting progressively closer to the cage, she decided she wanted to explore. She stretched towards the open door so, watching her body language carefully, I gently put her inside. She loved it! The problem became how to get her out again!

I chose a family run removals company who were happy to help me break down the big cages on the morning of moving and supply a small van to travel with us on the fast ferry. The van would take the four big cages, parrot stands and other things we would immediately need on our arrival. The van driver would also help me put the cages together in our new house. The rest of our belongings would follow on the overnight ferry.

Stepping down onto the carrier perch was again achieved by breaking the behaviour into small, manageable steps. Using the cashew briefly as a bribe, I got Ollie to reach for it over the perch, and took him out again. Each short session had him reaching further for the cashew until he had to put one foot down on the perch, then two feet. I began to hide the cashew so that it became a reinforcer (given after the behaviour) rather than a bribe (given before the behaviour).

The sound of tearing tape

The packing materials were delivered and I began packing in earnest. How could we have so much stuff even after a ruthless cull? Kobe was in his element imitating the sound of tearing tape and flying onto and into the boxes to explore. Thankfully he didn’t christen any of them or chew them too much.

I was now reinforcing the increasing time Ollie was on the perch inside the carrier. Always he had the option of coming right out again. I also hung some of his favourite toys inside as extra incentive to stay. The final goal was to be able to close the door with Ollie remaining relaxed inside. First step was me reaching to touch the door; then touching it; then moving it a centimetre and back again. For each successful step his relaxed body language was reinforced with a piece cashew. Eventually I could shut the door for one second, two, three, five, ten seconds.

It was time to test our year of training. Kobe entered his carrier first. It was now Ollie’s turn. My heart was pounding; we hadn’t generalized the behaviour to early morning. I needn’t have worried. Ollie calmly entered. He received a jackpot reinforcer of a palm nut and I gently shut the carrier door. YES! Bobbie eagerly followed suit, and finally Chico. By the time the men arrived at 7am the parrots were happily munching on their little bowls of fruit, veggies and sprouts. The hardest part in my mind was done.

The big cages were swiftly dismantled and the screws, toys and perches went into labelled bags for each bird. I had colour coded the cage parts with stickers. A different colour for each bird. A mini camping fridge filled with fruit, veggies and sprouts was also packed onto the van.

Suddenly it was midday. Water bowls were swapped for seed bowls and I added more fruit to the fresh bowls to provide moisture. The men would finish loading the furniture and boxes and lock up. I arranged the four carriers in the back of my car on towels so they didn’t slide or touch each other. It was a hot sunny day and I was glad of our new fitted car window shades. I turned up the radio and we sang raucously all the way to Poole. Ollie was so excited and vocal which was a huge relief, since on the odd times we had previously visited the vet, he had always arrived in a sorry mess; frothing from the eyes because of his sinusitis, gasping for breath, feathers slicked flat and obviously terrified. This journey was completely different for him, maybe because all his friends were with him and certainly because of our training.

Poole harbour was well sign posted. We queued, had our ticket checked, was given our neon pink pet sticker to hang from the car mirror and drove onto the ferry. It was the Thursday before Liberation Day so the decks were full of army vehicles and motor bikes. All the cars with pets were directed to the middle deck. I had been worried about the exhaust fumes but they weren’t too bad. I kept the car windows shut until the last minute.

How I hated leaving them. I put a dark sheet over the top of the cages, leaving the sides uncovered for ventilation, in the hope that they might go to sleep. I was a little worried about security as we had been told to leave the windows open a few inches, but with the sun shades in place and the covers on top, it was hard to see what was in the car. I said a tearful goodbye and locked the vehicle.

It was a 4.5 hour journey, marred by worry for the birds. Were they too hot? Too cold? Frightened? Seasick? My brain constantly whirred through all the awful scenarios that could possibly happen. Then true to form the Condor Liberation developed engine trouble. Not too bad, but it would add 45 minutes to our journey. I fought back the tears.

As we docked in Guernsey, I ran down to the car. What would I find? I jumped into the driver’s seat and checked each bird. It was cold so I shut the windows. “Everybirdie” seemed fine. Ollie was still on great form as were the other two Amazons. It was just Kobe my little hand-reared Pionus who was bored, whining and wanting to get out of there; he doesn’t enjoy his Amazon company at the best of times. Half an hour later the Guernsey vehicles had disembarked and there were announcements to leave the car deck as we would be continuing to Jersey. I wound down the driver seat window a little for air.  Kobe whined even louder as I got out of the car. I promised him I’d be back soon.

Last leg of the journey

The Liberation continued to Jersey on half powered engines. But at last I could relax and enjoy the scenery knowing the birds were fine. I hadn’t been back to Jersey in twenty years so it was fun to see familiar and not so familiar landmarks. We passed Corbiere Lighthouse and the golf ball like weather station not realising our new house lay just a few hundred metres inland of them. The Liberation navigated past the white sands of St Brelade’s Bay, the craggy headland of Noirmont with its concrete German lookout posts left over from the war, and finally we chugged past the flat expanse of St Aubin’s beach, around Elizabeth Castle towards the harbour.

It was a huge relief to get back into the car. We didn’t have to wait long before disembarking. Two customs officers stopped us briefly, asked the reason for my visit, saw the car load of parrots and waved us on.

We eventually found the house. The van who had become separated from us was already there waiting. The driver and I unloaded the cage parts and put them together. Then I was left to add the perches and toys. At last the birds could come out of their carriers. They had been inside them for nearly fourteen hours and had survived! Not only survived but had enjoyed the journey.

Our trip was in May 2015. Since Brexit, the export rules for parrots have become more complex. ALL pet parrots now need a CITES Export Certificate to be able to export them out of England. Check with the ferry or plane regarding all the necessary papers well before leaving. A CITES Export Certificate can take up to a month to arrive and a fee is charged: https://www.gov.uk/guidance/cites-imports-and-exports 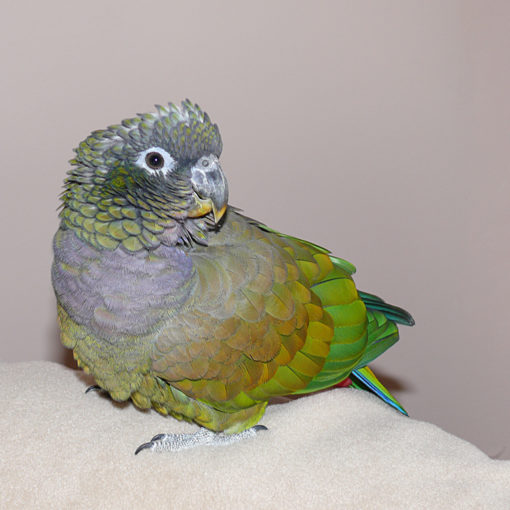 This article was first published in Parrots Magazine January 2010 Issue 144. It was updated in July 2021. Initially cautious, the shy […] 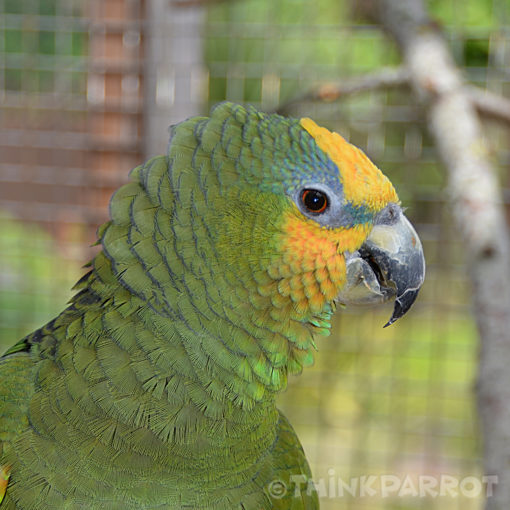 This article was first published in Parrots Magazine August 2021 Issue 283 What is PDD/AG? AG/PDD is a progressive neurologic disease with […] 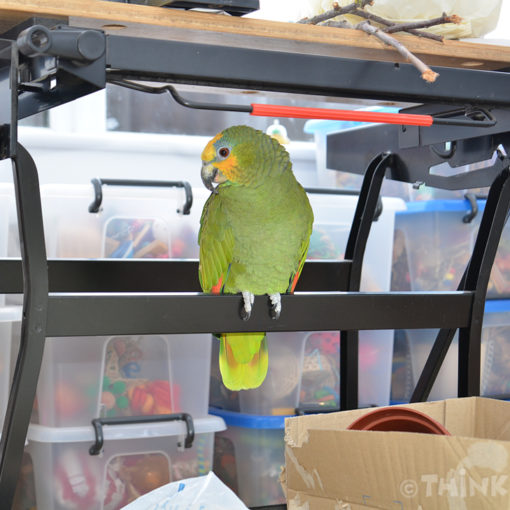 This article was first published in Parrots Magazine December 2018 Issue 251 A whirr of wings is swiftly followed by loud screaming, […]